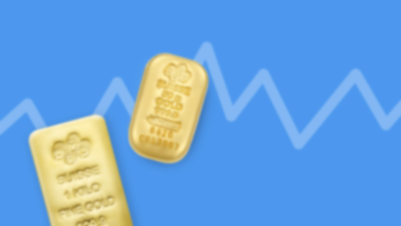 Since the start of 2022, the stock market has been on a wild ride, while gold was close to hitting a new record high in March. Which has performed better so far? We guess you already know.🙃

Almost half the year has passed in a flash, meaning it’s time for a mid-year review of stocks and gold. 🤓

In this SPOTLIGHT, we will see how gold has performed so far compared with the biggest U.S. and European stock indexes.

But first, let’s look at the major events that have been driving the stock and gold markets over the past months.

What has been happening in the stock market?

U.S. stocks have been thrown headfirst into turbulence right at the beginning of 2022.🌊

This dramatic market drop was largely driven by the Fed’s plans to raise interest rates in response to soaring inflation.

Why the stock market is so turbulent?

As you know, the U.S. central bank has promised to hike interest rates this year to tame soaring inflation, which has hit its highest level in 40 years.

This idea has spooked stock investors, partly because higher rates could hurt company profits and make stocks appear less attractive than other investments.

Why the stock market is so turbulent?

The war in Ukraine has brought new uncertainty to a stock market that already had a rocky start this year.

Russia’s invasion has caused a supply shock that has helped drive up oil prices, while also sparking concerns about Europe's economy.

How is the stock market doing today?

From the looks of it, not very well.

Last week, the S&P 500 fell into a bear market, dropping more than 20% from its record high.

To add to the pressure, the Nasdaq went down more than 27%, recording its longest weekly losing streak since 1923, while the Dow Jones fell 1,100 points for its biggest decline since 2020.

What is a Bear Market?

A bear market occurs when market prices fall by more than 20%, often due to negative investor sentiment and a worsening economic outlook.

And in case you need a better visual illustration of the recent bear market, watch this great video showing the market meltdown that happened on the S&P500 on May 18:

When will the stock market recover?

Unfortunately, the situation is unlikely to change until there’s enough economic data to prove that inflation has slowed down.

Here’s how Liz Young, head of investment strategy at SoFi, explains it: "I don't think we're at quite peak freakout yet. It might not be enough just to cross over into bear territory."

All of this is making investors nervous about continued losses and the growing possibility of a recession.

Moreover, the ongoing war in Ukraine has lowered investors' risk appetite, leading to many people selling riskier investments and turning to safe-haven assets like gold and precious metals.

What has happened to gold over the past months?

Like stocks, the gold market has lately been driven by 3 key factors:

But under such circumstances, contrary to stocks, the gold price went up, playing its part as a safe haven and a hedge against risks:

In February, the gold price was mostly surging on inflation and geopolitical concerns.

Days before Russia’s invasion of Ukraine, the spot gold price hit $1,912 per ounce, rising from its $1,800 range of the beginning of February.

And it didn’t stop there.

But why did the gold price increase so much?

Well, this impressive price increase was mostly triggered by the growing interest from investors around the world: since the start of the war in Ukraine, many gold dealers have seen their sales going through the roof, doubling their usual levels.

Then why did the gold price went down in April, you may ask?

The short answer to this question is that the Fed started raising interest rates in March, while also signaling a faster pace of rate hikes in the coming months and boosting the U.S. dollar.

This was one of the reasons why the gold price slipped to a more than two-month low at the end of April.

The relationship between gold and the U.S. dollar

Historically, the price of gold tends to fall when the dollar's value increases relative to other currencies.

What are the prospects for the gold price for the rest of the year?

Here’s what analysts at Heraeus wrote in their recent gold price outlook:

“Now the trajectory of interest rates appears set for the next few months; if inflation continues to be high keeping the Fed behind the curve, gold could resume its rally.”

And it looks like gold may be heading for a significant breakout this year, or at least that’s what Bloomberg Intelligence senior commodity strategist Mike McGlone says:

So, is gold outperforming major stock indexes in 2022?

So, now that you know what has happened in the stock and gold markets so far…

You probably can already guess which has done better?😉

Take a look at a quick summary of gold's performance versus the major stock indexes between January and April.

💡 To get the most accurate results, we excluded the latest stock market drop from our calculation, counting in only the 4full months of 2022.

A table comparing the performance of the gold price with the major U.S. and European stock indexes between January and April 2022.

As you can see, gold outdid almost all major stock indexes, except for the U.K.'s FTSE 100, which has increased 0.75% between January and April.

EUROSTOXX 50, a stock index of Eurozone stocks, has suffered the biggest loss of 13.84%, followed by Germany’s DAX, France’s CAC 40, and U.S. Dow Jones. The Swiss Market Index outperformed other indices with a 7.24% loss.

So what’s the bottom line?

Overall, volatility in the stock market can be a powerful reminder of two things:

If you are a beginner investor and unsure where to start, read our SPOTLIGHT to learn how to start investing in 2022.

There is one favored tool used by investors to find the best time to buy and sell gold and stocks at any given point in time: the Dow to gold ratio. 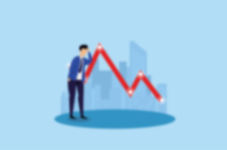 While stocks and bitcoin went down sharply due to rising inflation and uncertain economic outlook, gold has retained its value, exactly when investors and savers needed it. 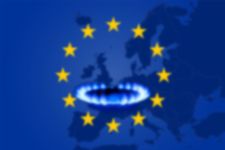 Europe is experiencing its worst energy crisis in 50 years. Rising energy prices are fueling already high inflation that could seriously affect your savings. Here's how to protect yourself.