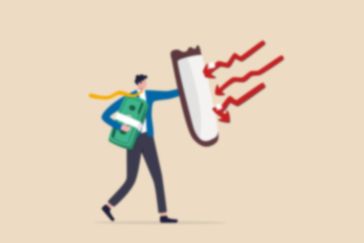 Central banks are rushing to raise interest rates to tackle rising consumer prices in Europe. There are a few things we can learn from them about fighting inflation.

With consumer prices going through the roof almost everywhere, central banks are taking certain measures to control them.

Is there something you can learn from central banks about protecting yourself from inflation?

The answer is yes, quite a few things.

Let’s see what they are.

How do central banks protect against inflation in Europe?

As you will see below, that’s exactly what Europe’s central banks have been doing so far.

💡 But first, here’s a little reminder:

What are interest rates, and how do they help control inflation?

When we talk about central banks' interest rates, we mean the interest rate at which the nation's central bank lends money to domestic banks, a.k.a your bank, often in the form of short-term loans.

By raising interest rates, central banks want to discourage borrowing and encourage saving, which tends to slow the economy down and decrease inflation.

Now let’s see how the European Central Bank (ECB), the Swiss National Bank, and the Bank of England are dealing with inflation.

After that, you'll see what European central banks can teach you about how to prepare for rising consumer prices.

After a decade of low inflation, the Eurozone is now facing the highest level of price increases since the creation of the euro in 1999.

During a meeting on June 9, the ECB described inflation as a "major challenge" that has "broadened and intensified" in the 19 countries where the euro is used.

Just to remind you, Europe's annual inflation hit 8.1% in May, the highest level ever recorded since 1997.

Bank of England admits it cannot stop inflation from hitting 10%

But, apparently, this hasn’t stopped inflation from rising…

“To forecast 10% inflation and to say there isn’t a lot we can do about it is an extremely difficult place to be,” BoE governor Andrew Bailey said.

He blamed the effect of the Russia-Ukraine war, which he said the central bank could not have foreseen.

The Swiss National Bank is under pressure to raise interest rates

The Swiss National Bank (SNB) has been under pressure to raise its -0.75% interest rate, the lowest in the world.

In May, Swiss inflation reached its highest level in nearly 14 years, but it looks like the SNB is in no rush to raise rates.

On June 16, the SNB will issue its next policy update, which will take into account the impact of higher inflation rates in other countries.

“We will, of course, analyze and take into account the impact of the sharp rise in global inflation on Switzerland," SNB Chairman Thomas Jordan said.

Swiss inflation remains much lower than that in the U.S. and the Eurozone.

As we’ve said earlier, there’s one more thing central banks will be doing this year to protect their economies from inflation:

Central banks around the world will continue adding gold to their reserves as a protection against growing economic troubles, including inflation.

That’s what a new annual survey from the World Gold Council says:

"In the face of a more challenging economic and geopolitical environment, central bank gold demand is likely to remain robust, with gold's safe-haven and inflation-hedging qualities serving to foster stronger conviction among central banks towards gold.”

As you can see, central banks bought 19.4 tons of gold in April and remained net buyers* in 2022.

*💡In case you forgot what a net buyer is, read our SPOTLIGHT: Central Bank Gold Buying Explained.

So what can central banks teach us about fighting high inflation?

Essentially, it comes down to two things:

Making a budget is a good first step toward financial security. Even if it doesn't solve your money problems, it will give you a plan of action when you deal with an inflated economy and rising interest rates.

Budgeting comes down to a few simple concepts: needs and wants. Your basic needs are things like housing, transportation, food, and electricity. Your wants are items like eating out and Netflix.

It may seem obvious, but it can be enlightening for people who’ve never tracked their monthly expenses to see how much they spend each month on different things.

Here are some specific things you can do right now:

You can protect your wealth with your gold savings

Just like central banks keep buying gold to protect their economies from inflation and economic uncertainty, you can start building your gold savings to protect your personal finances over the long run.

And while Mr. Buffet, a famous gold skeptic, sees it as a bad thing, we politely disagree.🙂

For us, this is actually one of gold’s strength: gold is a physical asset with intrinsic value that is very unlikely to ever go to 0… unlike paper money, some stocks, or cryptocurrencies.

In other words, if the price of gold goes up due to inflation, this 1 oz will be worth much more at the end of eternity, as Buffett puts it, but of course you can also sell long before that. And in the meantime, you will have your wealth protected by the inherent value of gold. The year 2022 will be marked by historic inflation, with record rates not seen for decades. But how does it happen, and what does it mean for savers and investors. 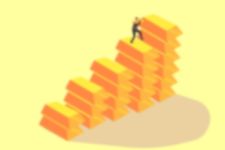